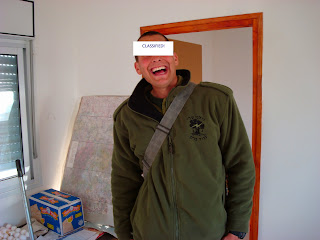 What is a simple fleece jacket? You can buy a North Face one for $150. Walk across the street into Old Navy and pick one up for $20. I remember early in high school when fleeces became really popular, and everyone had one, including me. In fact, I had a couple.

But among all the stupid little things you have to earn in the army, among which another couple posts are to be made, probably the most practical is your fleece. Especially prominent among infantry units, the IDF gets their soldiers double layered, green/gray outside, black inside, soft fleeces meant for winter. Typically there is a logo on the front breast of the brigade's symbol, battalion number and name, and the induction class.

For many months I hoped and prayed that our fleeces would be this awesome gray shade that the August 2008 guys from my battalion got. More so than praying for that gray, I silently begged fate to not give us the November 2007 bland dark olive green that some of our commanders had. I would've been happy as a pig in you know what to get anything with a Golani tree slapped on the front, but sometimes beggers find themselves choosing.

Fate, or more likely our RASAP (a combat commander doing logistics), made a compromise that suited me just fine. After our brutal 28k masa, our staff sergeant called us to the center of the barrack's plaza to receive our reward. I watched with open mouth as one by one the guys went in order and took in their hands yet another piece of integration into the IDF and State of Israel. Finally they too had a fleece with a combat unit's insignia on it, rising them just one notch above the dreaded status of young, or green.

Unfortunately, we didn't get the gray I was hoping for, but ours are a much lighter and easier on the eyes shade of green than those Nov '07 guys. Most importantly, our fleeces are thicker, fuller, fluffier, and less scraggly looking. The cuffs are broad and bulky. In short, they're not only prettier, but also warmer. As the guys would say, they've got more wahsach (pimped-out factor).

The downside is that the print on the front doesn't have our induction class month and year on it, as most of these things have. At this point, considering we are very 'young' in the army, it's actually something that many of the guys were happy about, not wanting to shout their undesired status every time they point on the fleece. But in two years when they're still wearing these...

By any account, I'm very happy with it all. And the cherry on the top? My staff sergeant was uncharacteristically nice to me when he handed me mine, assuring me three times that he got me one of the half a dozen or so extra larges available, despite there being other big guys in the company who would be getting larges. He even went so far as to show me the peel-away sticker tag, as if I didn't believe him.

You the man Bro!! We all love and miss you very much. Love reading your blogs as well!! Be safe bro!!

Congrats for the new spiffy fleece.

The downside is that the print on the front doesn't have our induction class month and year on it, as most of these things have.This may have been an ideologically motivated decision by the commanders. People think too much of pazam and too little of actual contribution.

Are those eggs in left down side of the picture?

Rafael - yes, they are. We were doing guard duty somewhere for a week, and that was part of our food.

Aviv - thanks for your comment. I have to disagree with your idea, though. our commanders are also obsessed with pazam. I think the rasap just forgot it.