Hanging Out At The Bank 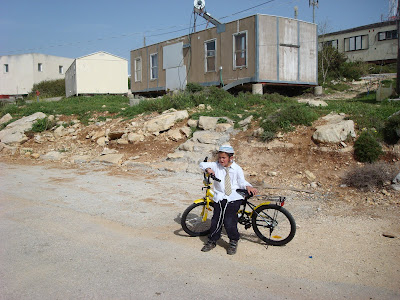 During Pesach (Passover) our unit was sent into the West Bank to guard various Jewish settlements found near Arab towns and cities. I was stationed with a handful of guys on top of a mountain at a highly religious community built by students of the famous Mercaz HaRav Yeshiva. On the hill across from us was Ramallah, the administrative capital of the Palestinian Authority.

It was an awesome week. To start off, a large army supply truck made its way up the road to the trailer we were stationed in and dropped off a new refrigerator, two microwaves (milk and meat based, for kosher reasons), and enough food to feed me alone for a couple months. Here's the fridge section, full of cheeses, yogurts, chocolate milk sacks, only a small selection of the fruits and vegetables we got by the crates, eggs, a whole chicken pre-cooked, packaged deli meats and sausages, hummus, and typical Israeli stuff like matbucha. 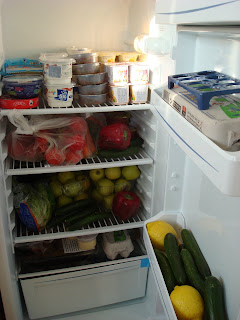 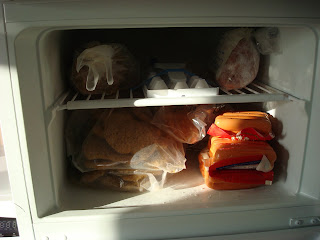 Better than all the food was the lax commander assigned to our group. Upon arrival and after settling in, we had a meeting where he told us the plan for the week, which included running every day, practicing shooting positions and gun jams (which suck and are totally necessary and we do every day and always involve crawling on unhappy surfaces), educational lessons on the area, and of course the point of being there, guarding the village.

Well, we ended up running every day, but his pace was so ridiculously slow that I probably could have walked briskly and been at the front. Our educational lessons lasted about five minutes before we started asking all about his four months of guarding in Nablus, a topic he gets particularly animated about, since it's his lone 'combat' experience. We heard some great stories, so that was fun. And the shooting positions and gun jam practices, and the inevitable crawling? Not even for a second.

The week was full of a blasting iPod in a portable jukebox, jubilant storytelling, delicious food brought by the family of a kid who lives nearby, a day of outdoor grilling, sleeping to your heart's content (a major rarity these days), reading, drinking instant coffee, and of course, guard duty at all hours of the day and night. The guarding was great for me, mainly because this village, as I said, was on the top of a mountain. You could literally see from Gaza, to Tel Aviv and the shimmering sea, all the way up to Mount Carmel of Haifa in the north! All this from the eastern portion of the country.

It really was a breathtaking place, tragically quiet and peaceful and beautiful. The hills were green and gently sloping, the trees spread fully with the end of the rainy season, and the residents, despite their obvious ambivalence towards a group of mainly secular kid-soldiers, were kind enough and smiled if smiled at. I personally had a great time playing with the ineluctable profusion of young children.

And maybe the best part? I thoroughly destroyed the political ideology of my very smart, very well-educated, social elite, politically aspiring guarding buddy in the course of a two hour shift in the middle of the night. I threw around all the fancy theories and scholars I could remember from countless readings I hardly did for classes I begrudgingly attended. To my great surprise and joy, he slumped down with a defeated whimper, declaring that he was now utterly confused. Victory. William & Mary Government Department: 1.

Worst part of the week? See for yourself. 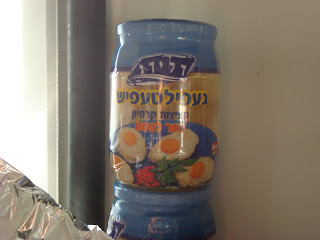 But seriously though, this village is absolutely one of those outposts that the international community is condemning for its very existence. I won't make any political comments, but I can say that I felt quite strange feeling so peaceful in such a controversial place. From our village we could see the lay of the land: Arab village on one hill, Jewish village on the next. On one hand it doesn't make sense why this is a problem. These residents live quiet, religious lives inside their self-imposed gates, not interacting at all with neighboring Arab populations. On the other hand, I'm a realist and I know that the tension in the air isn't superficial. There is a history of violence going back nearly a hundred years between some of these very communities.

But when you're there, just enjoying a tranquil day looking out at the orange sun disappearing into the sparkling Mediterranean, all that senseless violence between neighbors seems too remote to consider. It's just not what's on your mind. Why should it be? It doesn't make sense there. There's tons of space, that I can say confidently. Nothing is moving and the only sound you hear is the muezzin five short times a day.

Honestly, I don't know if that community will be there for the long run, but those people are building real lives there. I enjoyed my stay...
at 6:26 PM

"Quiet" lives? The word quiet wouldn't apply to any settlers I ever met when I lived over there.

Apparently Sallust wasn't there any time recently. The author/soldier was.

I'm just saying it was very quiet all around, even though the week before a jewish boy was chopped up with an axe in a strange terrorist attack.

The area was quiet, the people were quiet, and it was simply serene. But of course that's just the surface of it all.

I've never actually been to the settlements but I remember meeting lots of settlers that would come into Jerusalem when I lived there. Mostly American and Canadian settlers. Noisy people get the most attention so it isn't necessarily reflective of the group at large.

I just thought it amusing that your impression was so completely different from my experience. But the circumstances in which you meet people always makes a big difference.

sallust - I've met many a settler I wanted to chuck out the window.