Bar Refaeli, the Israeli “supermodel” who is dating Leonardo Dicaprio, is just another punk of the material world that has no respect for the greater purposes in life. She is something of a trophy in this country, however, simply because the world is recognizing an Israeli. Guys all across America and the greater women-appreciating universe oogled over her Sports Illustrated pictures…but I just see her as a punk.

An interview by Yediot Ahronot with Refaeli brought out the worst in this ‘celebrity.’ Israel has a mandatory draft, whereby even women serve 2 years starting as they are 18. Everyone does this, except for the most ultra-orthodox and the conscientious objector (read: delusional). Serving in the army here is like going to school in America – it’s just something you do. If you don’t do it, for whatever reason, you aren’t really respected. I really mean that. If you dodge your draft, you are considered a deserter of your nation, a traitor, a mooch off the blood and sweat of others. Draft-dodgers have the mindset that it is their single plight to serve, that only they suffer the hardship of giving up 2-3 years of your life, the potential to die, the fear inherent in releasing all personal sovereignty.

Rafaeli dodged the army by marrying a friend, thereby exempting herself from service. So what did she have to say about deserting her countrymen?

“I don’t regret not having been drafted into the army, because I made out big.”
“Why is it good to die for one’s country, isn’t it better to live in New York?”

I wish I could get hold of the full interview, because I’m sure there’s much, much more. But, let me breakdown Bar’s ignorance for you. First of all, as a girl she is basically guaranteed to not serve in a combat unit. Rather, if she is smart (which I doubt) she would be in some intelligence unit, if she is dumb (probably) she’d be in some type of military police unit, and if she is of average intelligence she’d have some random desk or office job. It’s not too much to ask, Bar, to serve in a non-life threatening position in the same manner that your family, your friends, and your countrymen have done to protect your assaulted homeland. What if we all thought like you? Do you really think that everyone else is so gung-ho about the army? What about the guys and the few girls that are in real combat units? Think they should dodge, or are you more important, and are your goals more important?

Secondly, is it better for an Israeli to leave Israel and live in New York? She also announced that she is moving, I’m supposing permanently, to Los Angeles. Listen, I’m also an American, and I love America. It’s truly the most comfortable place on earth. But, for an Israeli, considering how much this country needs successful and world-renowned individuals to boost the consensus that Israel is a ‘good place,’ is it truly better for one to move to New York or LA? In my opinion, it isn’t, simply because Israel NEEDS people like Bar Refaeli. Not that we need supermodels, but we need the boost in positive attitudes that typically only cultural icons can bring. Imagine if Bar Refaeli had served in the army, and in this interview or one with a western paper had declared her pride for Israel, her pride in her people, and that Israel is a good place to be. Imagine!

Rather, she chose to be a “proud” draft-dodger. I have no respect for her…and to be 100% honest, and I swear that I even thought this before I knew she deserted Israel, I don’t think she is nearly as good looking as girls I see here every day! I’ve thought that since I first saw her.

Especially now that you know what type of person she is, compare the first picture of her (a superficial money-grabber) with the second picture of real Israeli girls (sitting on the beach, drinking a beer, with their M16s nearby -- idyllic). 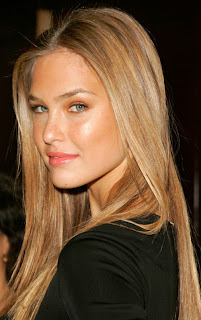 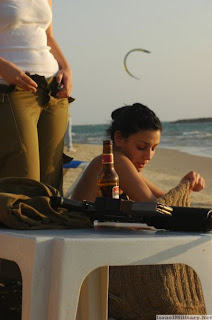 I just started reading your blog not too long ago. Started with the army portions and am now reading from the ground up. Although I'm only in 3rd year of university, I have the urge to move to Israel and join the army like you must have felt, which I plan on doing when I graduate. I want to tell you that your blog is a great source of inspiration and information, and you really have assured me that my decision is the right one.

Thank you for everything and g-d bless

Good luck, Canada. Enjoy college! It's a heck of a lot more fun than the army, to be honest!