Ramadan began this year just around the time as Rosh HaShanah, and the convergence of these two holy days has been somewhat unpleasant. Ramadan is a name for a month in the Muslim calendar. It is supposedly the month when Muhammad received the Quran, and as such it is a time of holy introspection, family togetherness, charity, and all the warm fuzzy stuff. Oh, and they can’t eat for a whole month during the daylight. SUCKS, I’m sure.

Muslims pray 5 times a day all year round, but during Ramadan there are extra prayers. I don’t know exactly when they are, or if they are in addition to the normal 5 or in place of, but these special prayers have to be about 4 in the morning. During Rosh HaShanah Jews aren’t to use electricity, and so there is a certain stillness in the night. Breaking that silence, the muezzin, or the guy that calls Muslims to prayer from the minarets above every mosque, cries out in the most unique undulations and pleas. The peace of a night in Jewish Jerusalem is transformed into Cairo, or Damascus, and one almost feels as if he has been transported back 500 years to a different time. I’m not saying these calls are a bad thing, I’m just saying they come at ridiculous times, and seem to be coming from a different world – in fact they are coming from a different world, at least a place I would never understand.

I can’t figure this one out either: Every day now at around 5 or so, as night is creeping in, the Muslims set off some big explosion and then not a second later the muezzin begins his call. I don’t see an explosion, I don’t see smoke, but it’s quite the noticeable sound. It really sounds like a bomb, but it’s definitely something directly related to their holiday. Maybe it’s a warning to not mess with them during their holiday…

In addition to the Muslim intensity for Ramadan prayers, the Jewish community was a spectacle itself this year for Rosh HaShanah. Last year I went to an orthodox synagogue for Rosh HaShanah, and found myself in a very uncomfortable situation. The rabbi was actually a guest rabbi, but he grew up in the very synagogue that he came back to lead for the holiday. His parents recently died, and after 30 years he finally came back, with much guilt for living so far away. Halfway into the service the rabbi breaks down in heavy sobs, literally crying like a baby, unable to speak. He would try to continue singing, get halfway through the first word or sentence, and lose his stuff all over again. This went on for probably 45 straight options. And he was the only singing – it was his job.

Needless to say, that was quite uncomfortable. Well, the rabbi that they had at the yeshiva was a serious professional. His grandfather, or great-grandfather (can’t remember which), was an extremely famous rabbi; the subject of the book Tzaddik in our Time. I won’t go into detail, but let’s just say this guy’s granddad was to the Jewish world like Thomas Jefferson is to the American national consciousness. With all that seriousness around me, I felt I had to escape the place. Six hours straight of being around all the guys, enamored with their leader while I wasn’t nearly impressed (I mean, I don’t even know if I believe half the things these people take for granted), sent me packing.

I went down to the Western Wall to find my own personal clarity and meaning. There is a large, large cave alleyway connected to the Wall, which is actually a Roman era covering where they built apartments next to the Wall. So, you go into the area and are still at the Wall, but it’s cave-like: cold, slightly damp, cozy. I grabbed a corner and a certain book, and was feeling pretty good. Then a rabbi leading a group in prayer began to wail, similarly distracting as the one I experienced last year.

This guy was wailing in long, high pitched, sustained cries. At first it wasn’t too bad, just whimpering and a few second long yelps. Then he built up to a bit longer of a wail. Eventually he was yelling for 10 minutes straight, only stopping to breathe. No one was going to tell the guy to be quiet, because in terms of the theory of the day this behavior is what the Jewish portrayal of G-d would really want… but, it was obnoxious. Once he stopped, whenever he tried to start his outburst again everyone would shush him. Thank goodness, because it was so crazy looking.

Finally the day ended, we ate a big meal, and then I watched a movie on my computer. The next day was Tzom Gedaliah, a fast-day, which was especially difficult considering how many meals I had in the past few days. I’ll be glad when all the holidays are over, and we get a couple weeks off. I plan on going up north, hopefully with a few guys I don’t mind from here. I already need a vacation from this place.

Attached here are a few low-res pictures. This is the square where I live. I took the pictures of it from the entrance to my apartment. The big house and square is the Beit Rothschild and the square I was talking about earlier. They took the sign down, but that column in the second pictures is like 2000 years old or something. Just sitting there, like everything else in this city. You walk by something ancient, but there's so many ancient things, some stuff simply becomes play-toy for kids. Typically it is packed with kids, but they’re in class right now so I’ll have to take some better shots later. Also is my “apartment,” which actually would be a nice place if there weren’t 10 people living here. Also is a better quality pic of the view from my window. Not bad for 100% free living. Not that nice either, though. 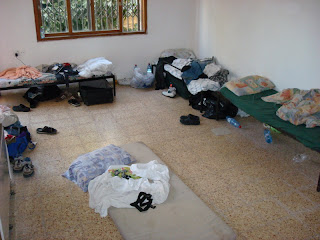 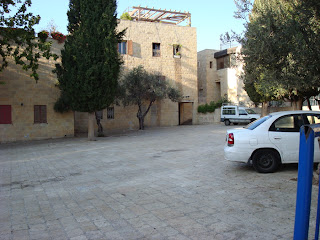 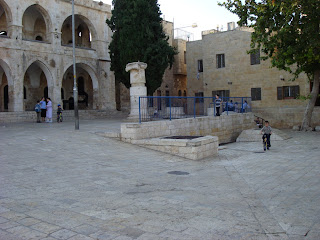 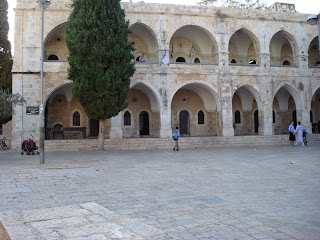 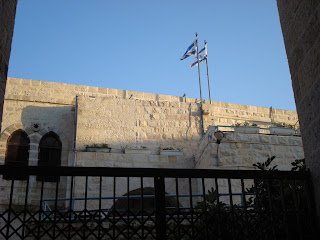 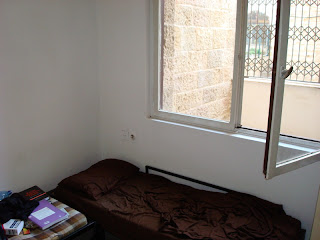