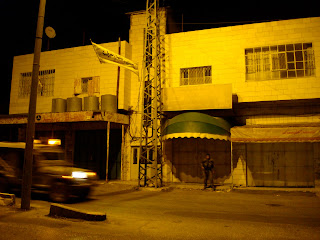 During a routine mounted patrol, my commander and I jumped out at a street deep inside the city to stop cars. We wanted to only stop the ones with yellow, Israeli citizen license plates. There are many Arabs that live inside Israel proper and go to the West Bank for family visits, or even to work. It's not suspicious or a big deal to see an Arab driving a car with these Israeli plates. However, many times a car is stolen inside Israel, it tends to find its way into the West Bank - far away from regular police detectives and searches.

With our boots on the ground, we stood behind the patrol Jeep and waited for some yellow plates to drive in our direction. It didn't take long to get our first stop, only a few minutes really. The procedure that the residents know so well is quite simple: pull over here, turn the car off, step out of the vehicle please, show me your ID and driver's license and car registration, open the trunk, what's in the bag? Pretty tame stuff, obnoxious to them probably, but nothing so demeaning or humiliating as Reuters and the Associated Press (AP) report.

After a good while of checking the north-bound traffic, we moved to the other side of the street to check the opposite direction. There turned out to be so many cars coming in that direction, which leaves the city, that my commander and I were each checking cars on our own. Nothing too interesting. Every single one of them seemed to be a Jerusalem Old City resident visiting family. No stolen cars, so far. Nothing suspicious, besides no one having their driver's license or super-mandatory ID (dealing with those are always fun).

And then I saw the jackpot. A young guy driving a nice, dark Volkswagen turned off a side-street and came my way. I glanced at the plates only to notice that he had none. No license plates at all, yellow, white, or green. This was my guy.

I made it abundantly clear that I needed him to pull over exactly where I directed him. He slowed down and came to a stop, turned the engine off, and got out of the car. I informed him in my extremely basic vocabulary of Arabic what I wanted from him, and he complied silently. Driver's license and ID all in order, thank you very much. After instructing him to do so, in Arabic, he opened the back trunk. Empty. Good. Now, with all the preliminaries out of the way, it was time to question him about the missing plates.

I asked him in Hebrew what the story was. "I'm sorry, I don't speak Hebrew" he replied in broken tongue. "Great," I thought. I was going to have to go through the whole pointing and grunting routine, ending it with sternly growled Arabic words like "JEESH, lo auto!" Army, no car! They figure out pretty quickly what you want from them, because really they knew in the first place that you can't drive a car without license plates, but it's a major pain in the ass. I took a deep breath, and began to point at the bumper... "Nu?"

"I'm sorry," he asked. "Do you speak English?" This was something of a rarity, as the people we stop generally never try to speak anything other than Arabic with us. I never ask if they know English, as you really don't have to speak very much at all. The grunting and pointing usually works quite well, as does the ID database you punch their personal number into. But in this case, and since I was alone and could handle it how I wanted, I decided I would speak English with him - though I suspected that he actually didn't know very much of my native tongue anyway.

He had a strange accent, even from that first sentence. It sounded like something I had heard before. He certainly didn't have a Palestinian accent, but I couldn't put my finger on it. I ignored this, however, and finally after a long pause I responded.

"Yes, I speak English. Where are your license plates?"

"Well, you see, I just returned to al-Madina al-Muqaddasah and this is a new car. I just got it yesterday, and they haven't given me the number plates yet." He stood there with his identification card in his hand, nervously looking at me, obviously unsure just how much trouble he was going to be in. He was tall, about six feet three inches or so, just shorter than me. He had a solid frame, if not a little chubby, but of that constitution where you expect he is hiding respectable strength under a small layer of fat. His hair was dark black and curly, and his skin tone was similarly shaded. Black clothes and black shoes completed the theme. Everything was dark, but he seemed well off. This was not the poor Palestinian you pitied living in the slums.

"I already applied for the number plates, I'm just waiting for them," he repeated.

Number plates? I've heard that before, but where? And that weird, out of place accent? I looked around at the screamingly West Bank setting around me, subconsciously absorbing some unknown dissonance in this man, between being an Arab in this city, and speaking this brand of English quite well. Something was so familiar about his behavior, and his voice, and I felt that the atmosphere of our surroundings were throwing me off. And so I asked.

"What is your accent?"

With that question he nearly jumped out of his shoes. The man seemed either agitated or excited, but he showed nothing in his facial expressions to reveal just what he was thinking. He shifted back and forth on his feet, with his arms stiffly extended at his sides. Finally he broke into a wide smile, and nearly shouted, "But it's Briiii-teeesh!"

Now it was my turn to jump out of my shoes, rock back and forth, and show the greatest amount of confusion seen since I joined the ever fascinating IDF. Honestly, if a shooting were to have occurred one street over, I would have been upset to leave this unexpected, curious case. I had to get to the bottom of how this man, in this city, being Arab, could have such a strong, thick British accent. I live with a British person, and many of my friends are British, and I was rightly astounded.

"What do you mean?" I asked like some dim-wit. "How?" I stood in front of him, fully squaring my shoulders towards him, though not aggressively, but rather entirely engrossed in hearing what he had to say. This was totally going to be the highlight of my day.

Laughingly, he went on to explain just where he picked it up. "You see, I was born and raised here, but I moved to London about 7 years ago. I have family that lives there, and I lived with them. I got a visa to go study there, which I did, but I was a bad student. So, I worked for my uncle. We own a bakery in London. I guess I just picked up the accent!"

"Really? So, why did you come back? You're crazy, huh? I suspect that London is a lot nicer than this place." Our relationship had totally changed from one of me in total authority, a semi-police like figure, to one of actual, real openness and familiarity. Not that I didn't have my hand on my gun's grip, or that there wasn't a magazine loaded, but he had been checked and clearly wasn't a threat. Just obviously daft, was all.

"Well, my father demanded me to come back. Over there I didn't do well in school and didn't finish. But really he was pissed off because of girls."

"Girls? What does that mean? You got caught with girls?"

"Well what? They're religious and it's forbidden to be with girls unless they're your wife?"

"No." He chuckled out loud a little and leaned against his car. I could tell he wasn't quite up for telling me something, but I figured he'd let it slip. I wasn't going to let it go, at least.

"If you don't tell me I'll have to impound your car," I joked.

"OK OK! Well, I was dating a Jewish girl. My uncle didn't care, but somehow my dad found out. And then as-"

I cut him off with the most genuine, deep, liberating laughter I had released in months. I could barely keep it down, and when I turned around I saw my commander staring at me quizzically. I waved him off, and turned back to this Palestinian-Arab-Muslim-Britain-Resident-Forbidden Casanova. He realized just how comical and ironic the situation was, and joined in my laughter. It was just too much.

"When I got back just a couple months ago," he drawled in his British cadence, "my dad even took my passport away!"

We laughed for a few more minutes, and I asked some more questions, none of which I can unabashedly post here. I wrapped it up eventually, admonished him again seriously that if he didn't get "number plates" (stupid British) immediately, the army would take his car until he put them on. And then as he was moving around to the driver side seat, I looked in and noticed in the cup holder a yellow, citrus themed can that I had seen everyone drinking. It was long and skinny just like a Red Bull.

Excitedly he held it up to me, pushing it towards my hand. "Take it! I love them! Seriously, enjoy it!"

I declined only because of my professional obligation at the moment, but this interesting English speaker left me feeling pretty good about our work in al-Madina al-Muqaddasah. Maybe what all those angry Hamasnikim out there need is a little vacation outside the country. Let them see the beauties of Western life, and maybe a couple Jewish girls can talk some sense into them! No?

(By the way, I think I found Fizzeh Bubbelech in that yellow citrus drink!) 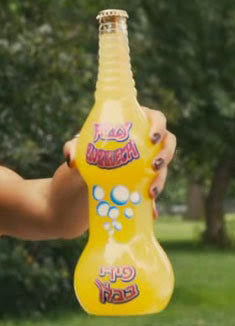