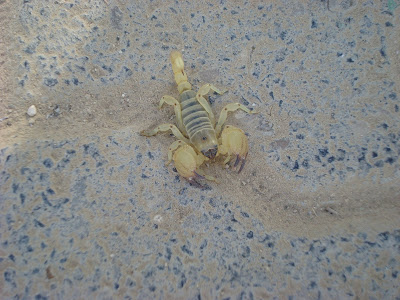 The greatest threat to me in the recent past wasn't Hamas or Hizbullah, kidnappings or rocket launches, bombs or any other terrorist attack. Rather, it seems to be scorpion season around here. We've been finding them left and right, and they usually scare the hell out of us because they seem to be just where we had our hand or were sitting. That scorpion was in between the strap and back portion of a backpack that was moved and about to be picked up.

Interestingly enough, however, turns out even crazed 18-year-old Golanichikim have compunction about killing even dangerous creatures. It took them about 10 minutes to figure out whether or not to kill it, with half the camp yelling for it, and the other half proposing to move it into the desert. Needless to say, our army boots are pretty good at crushing things.
at 9:09 PM

Those yellow ones are really bad.

so where's the After: pic?

Kind of a random question but isn't it true that Golani is full of arsim?

are the military police the ones that check me for pot???

also are you doing any missions and what not?....or mostly on base for now?

I would kill it without a second thought. From far away if i can, like with gunshots. Hate those creepy things.

he is not here to answer your questions about pot. do not join the IDF because you are gonna be the first to get another soldier killed with your immaturity.

anonymous1- yeah, we have some Arsim, but truth be told, real Arsim can't handle the rigors of infantry. So we really have tons of hardcore mizrachi types.

Amnon- kinda missed you and your silly questions. You're likable like a naive criminal.
the mp will be less responsible for busting you... That's for your big mouthed fellow soldiers and commanders.

Yowks, Danny, that's not a cool place for a scorpion!!!

We dealt with them critters in Iraq, too. Only thing they are good for it death matches with Camel Spiders. ;)

looks like it would be real juicy on the inside. i wouldn't want than bugger on my shoe but i certainly wouldn't want him crawling on me later either. Acetone or paint thinner would be my weapon of choice.

cut off the tail & eat him

ruanne - wow, I'd love to put a scary scorpion in the ring with a spider. Did you guys do that in iraq? Its like a movie over there!

Jon - army boots are made for stompin' guts.

Paps - and yeah, I'd leave it only to you to propose eating a deadly scorpion.

I got bit by a black on in my bed in Gilboa. Kill'em all for me,would ya?