Kitty Litter In The IDF 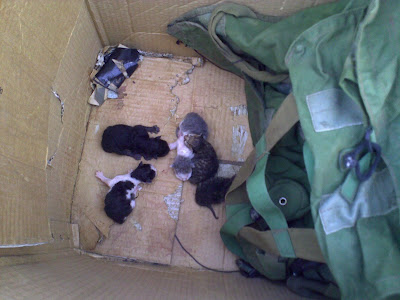 I meant to post this about four months ago when it happened, but you know how life works out. Anyway, the RASAP (logistics guy for a company) had me cleaning out his storage room when I heard a strange noise coming from a shelf. I looked up and saw a cardboard box marked "vests" where the noise seemed to be.
Taking it down, I felt something shift inside the box. As I set it down on the ground, I saw a litter of kittens, all meowing as if nothing was wrong at all! I told the RASAP immediately, of course, and we took the box outside onto the sidewalk. As I furtively pulled out my phone and took the below picture (still at this point technically forbidden for me to have a phone on me at the time), he called over all the commanders nearby.
We had a good laugh about it. I had to run off to do something else, but I wonder what they did with the litter? I know that everyone was feeding a stray, tiny, miserable kitty a few months later that was living next to a dumpster, so I suppose they'd also have pity on this bunch.
Well, if you ask the anti-Israel crowd, they'd say he probably ate them!
at 10:30 AM

When I was in charge of a training equipment warehouse in Ze’elim, the place was full of rats. I found a black kitten at my kibbutz and put him in the warehouse.

Came inspection day, the base commander saw the cat litter box (an earth filled ammunition box) and said “Oho, you are keeping a cat, are you, you know what you can do with your cat?”

“Yeah, I know, nothing, unless you want the rats to eat the equipment” I said.

The commander left without a word, and did not hassle me about the cat anymore.

A Non-commissioned officer NCO (or Sub officer, if you aren't a US or Commonwealth military aficionado) who is appointed Company Supply Sergeant.

In the IDF this is a position usually given to a veteran Staff Sergeant or Samal Rishon (סמ"ר) who has yet to reach the more advanced rank of First Sergeant, and is typically considered to be easy duty.

Of course in the IDF, the name of the position takes on a meaning of it's own. Thus we have fresh recruits screaming out the Company Supply Sergeant's ill named honorary title as if it were his true rank...

Wikipedi has an accurate list of IDF ranks and their relative (US) translations.

no, they could not eat them... they are not Kosher ;)))))))
I really do hope they are all well and fed, I love cats. the base I was in two years ago was full of cats, therefore there was not a rat anywhere!
Kiki

I truly hate cats. they just piss me off, the look so F^%$ing weird! I have a bb gun and just shoot them to get them away. on the other hand i love dogs. if there is a rat problem i get the rat traps instead of getting freaky cats

Hello,
I've posted on here before but I have a question for the author. I have some pretty ambitious/lofty goals when i get to the IDF but my hebrew is subpar, and thats a complement. My question is, if I take ulpan for a year, will my hebrew be sufficient enough to allow me to take the psychometric exam and get a yom sayerot? Or do I need to start learning now. I have 3 years until induction.
Thanks for your thoughtfull consideration.
P.S how is your hebrew treating you now?

I think a year ulpan would get you there. I got through level gimel and felt pretty conversationally fluent, and that was with zero hebrew before.

Point of the story? Hebrew is not that important. On the other hand, for your own sake, learn as much as possible. But in terms of your army life, don't stress on that bit.